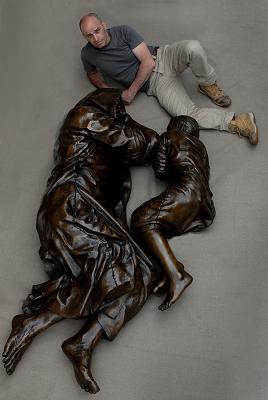 It is no coincidence that his work harks back to an earlier era when technique and skill were more highly regarded than they perhaps are today.

Mark builds on the hard earned expertise of four generations of professional artists including an Edwardian Royal Academician, bringing modern sensibility to traditional materials. Mark Swan studied sculpture at three art schools and at the feet of professional artists in London, the Netherlands and Italy, where he spent ten years living and working in Rome, Naples and Milan.

Mark has worked on numerous commissions from the public, corporate and private sectors over the past 20 years, working within the exacting requirements of each project without compromising his high standards as a sculptor.

Although Mark is proficient in a variety of sculptural mediums and languages, clay lends itself to his particular skills where the fluidity and ephemeral nature of expression can be captured and fixed for the viewer to bring to it their own ways of seeing.